Ubisoft and Tom Clancy's released an impressive preview of their upcoming game title H.A.W.X, scheduled to released this fall on PC, PS3 and Xbox 360 this air combat game seems promising, The game plot is set in 2012 and you have 50 different planes to perform super-cool dogfights in sky and have fun. 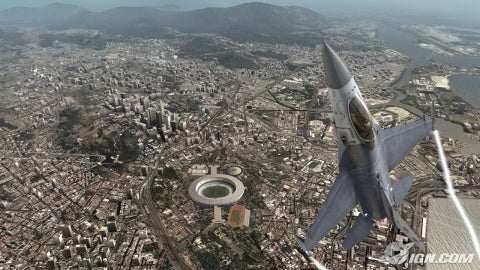 HAWX features an Enhanced Reality System (ERS), which is meant to make even the average pilot feel like Iceman. ERS includes radars, incoming missile detection, an anti-crash system, damage control system, tactical map, information relay, weapons trajectory control and allows players to give commands to their AI squadron. With the Assistance Mode flipped on, the ERS will put pilots into a maximum safety mode. Think of it like having all the assists turned on in a racing game. You get more freedom and control with Assistance Mode off, but you will also be at greater risk without the full protection of the ERS.

I like a good Jet fighter game... I hope the terrain is 3D and interactive.